If you're a parent, you'll know that happiness is a sleeping child.
So, when our twin baby girls drifted off during what we thought would be a short drive to RIM Park on a sunny Easter Sunday, we decided to take the scenic route and let them sleep.
Our decision to shoot past the park and into the countryside was rewarded as we tooled along Sawmill Road and spotted a sign at the entrance to a driveway.
Maple Syrup, it read. Boiling Today.
As we drove past it, my Australian wife reminded me she had yet to visit a maple syrup production site in the nearly eight years she has lived in Canada.
Feeling I had shirked my national duty, I turned the car around and pointed it down the muddy lane into Sugarwoods, a syrup operation run by Alan Murray, with help from an amiable man named Rob.
Surprised as we were to find Al and Rob working on a holiday (and a Sunday, no less), we were thrilled when they warmly welcomed us into their sugar shack for a close-up look at how this quintessentially Canadian product is made.
As the girls snoozed in their car seats, we thoroughly enjoyed our crash course (more of a refresher for me) in syrupology. I used my trusty BlackBerry Q10 to capture all the images in this post.
Thanks to my friend Darin White, the hardest working man in spare-time photo blogging, for inspiring me to carve out the time to post. Further thanks to the folks at Foto:RE for getting us together for a critique/review session last week, where supremo shooter Sean Puckett assuaged my smartphone insecurities by repeating the adage that the best camera is the one you've got.

At Sugarwoods, we felt lucky enough for the personalized tour, but luckier still when Al and Rob told us this was likely the last day of production for their 2014 season. The long and exceptionally cold winter meant a later start, and thus a slightly later finish.
The end of the season is also when the syrup runs darker (and therefore richer in flavour) from the evaporator, as it was doing as we stepped inside the shack. Rob held a big white bucket as the dark nectar gushed from a tap.


We showed our thanks to Al and Rob for the personal tour by plunking down $16 for a litre of syrup. The bottle was hot in Tenille's hands; it was that fresh.
Can't wait to return once our girls are old enough to stay awake through the adventure.
Oh, and we did eventually make it to RIM Park for a wee walkabout.

This post constitutes a thank-you to my friend Darin White, who has a knack for luring me away from my desk and out to lunch, where the talk invariably turns to photography. I am always left humbled - and usually, feeling inadequate - due to Darin's dedication to the craft despite a busy life and heavy workload.

Today, I decided to do something about it as Darin and I walked back to the Tannery, where we both happened to be working at our day jobs this particular day. I pulled out my new BlackBerry Q10 smartphone (the one with the keyboard), and went looking for my photo mojo, which had taken a bit of a hiatus of late.

From the way the camera performed, I think I'll be doing a lot more shooting (and less mojo-hunting) in the days and weeks to come. 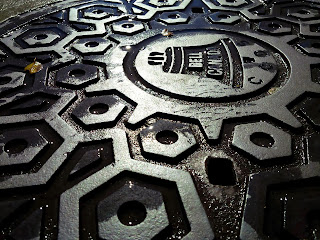 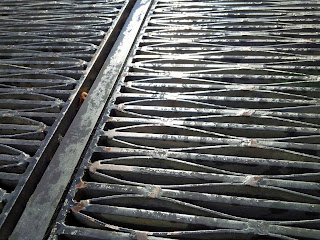 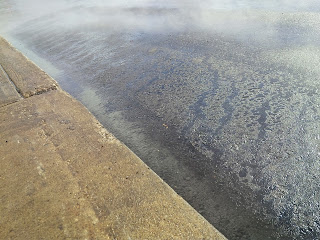 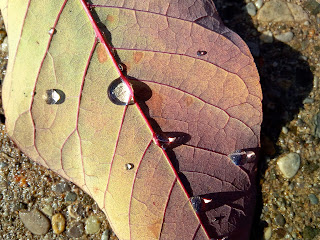 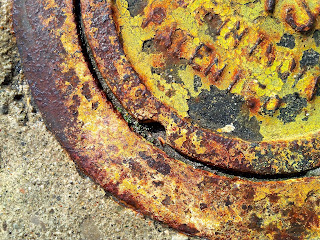 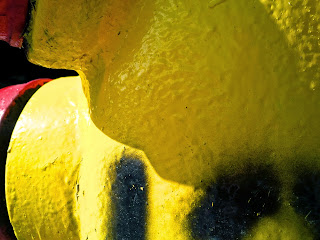 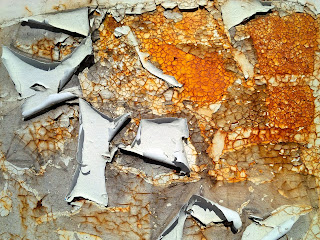 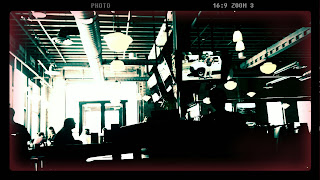 It's been a while. No excuses; I've quite simply been neglecting this space in favour of other things.

Well, because of the photograph above, and where it came from - the recently released BlackBerry Z10. Aberration is and always has been a blog of photos taken on BlackBerry devices of one model or another.

I don't have the all-new new Z10 yet, but my friend and photographic brother, Darin White, does. (Darin works for BlackBerry, so of course he does).

The other day over lunch, Darin demonstrated the Z10's photographic capabilities, and we talked somewhat excitedly about the exponential increase in possibilities it offers over previous BlackBerry models.

Inevitably, it led to me borrowing Darin's phone for a few seconds, during which I snapped this shot from our booth at the Firkin at the Tannery in Kitchener.

After applying effects using the Z10's dead-simple in-camera tools, I saved the shot. Then Darin showed me a nifty trick to get it from his BlackBerry onto my previous-generation 9900 model.

Since both our phones are equipped with near field communication (NFC), we were able to share the photo simply by holding our devices together, back-to-back, for a second or so. And voila, the image was now in my device's picture folder.

Needless to say, I'm excited about where the Z10 will allow me to take this blog, once I get my hands on one.

Until then, go and check one out for yourself. You won't regret it.
at 16:46 1 comment: Links to this post 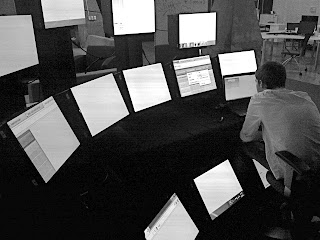 Darin prefers the term 'maker' because he is, like I am, uncomfortable calling himself an artist.
Nonetheless, the two of us are hours away from putting ourselves out there as, well, artists.
We're mounting a one-day installation called DISCONNECT, which features stills and video we've shot with a surveillance esthetic. The idea is to get people thinking about this hyper-watchful world we've built for ourselves, one in which most of us who live in cities are photographed several times a day without our consent, much less our concern.
Who cares? Maybe you do, maybe you don't. Either way, we think it's worth pausing to think about, and we hope you do, too.
Subject matter aside, it's been a blast putting this project together, and an education on several levels.
Most crucially, I've been humbled by Darin's dedication to and enthusiasm for photography in general, and this project in particular.
He has a demanding job at RIM, a young family and all that those things entail, and yet he's found time not only to keep shooting and blogging on makebright, but to render content, build stands for the Christie Digital MicroTiles we're using, write code, haul gear and design promo materials - all for a one-off, five-hour show we have no idea anyone will like.
In short, Darin's a pro - and I'm fortunate to collaborate with him.
I hope it's the first of several projects we can put together, and that one day, we'll both feel a bit more comfortable in acknowledging what we will irrevocably become in a few hours - artists.
In addition to Darin, I'd like to thank Anthony Stevens (pictured above, working on our MicroTiles) and Jordan Priede of Christie Digital; Iain Klugman, Lisa Thompson, Brendan Lowther, Jeff Nesbitt, Sharilyn Allen, Isabel Quinn and the rest of the team at Communitech, and my wife, Tenille, for their help, patience and support.
If you make it to the show, thanks for coming out; if not, maybe next time.

I don't think my dad realized I was taking this picture as we sat talking over a Father's Day pint today.
At 83, his hands have done many things, but snapping photos with a smartphone is not one of them.
As a boy, he used these now-gnarled hands to pick and sell apples from trees not far from the bar where we met today. The trees are now long gone, of course.
When his parents ran country hotels in the 1930s, and sold hooch in defiance of Ontario's stiff liquor laws, he used them to hide the bottles in a sawdust pile outside the local sawmill whenever word of a raid was on the wind.
He'd then use the same hands to search for the same bottles, sometimes in vain.
He used them to play his faithful Gibson ES-350 on stages around the province, and on dozens of episodes of his musical variety show on CKCO-TV, when TV was newer than the internet is now.
This therefore meant using them to punch out the loudmouthed hoods who asked "Where are your horses?" as a way of mocking the cowboy attire he and his bandmates wore.
His right index and middle fingers cradled untold thousands of cigarettes over a span of 45 years, until a dying friend clamped a hand around my dad's wrist and implored him to stop. And he did, cold turkey, more than 20 years ago.
They spanked (not often), and pointed fingers of warning and blame. They also tickled and waved and tossed us headlong into Lake Huron, from the makeshift diving board of his shoulders.
They still turn a steering wheel; for how much longer, nobody knows, and so they fidget with worry.
When we shook hands and said goodbye, my dad's hand felt thin and papery in mine, but still strong.
A couple of hours later, I shook my own son's hand when I dropped him off at work, and wondered what he felt.
at 22:17 1 comment: Links to this post

Of porches and poems

I'm not one of those guys who has trouble explaining why he loves his wife.
If you were lucky enough to take in the Grand Porch Party in our Waterloo neighbourhood on Sunday afternoon, you'll know why. It was bloody fantastic and entirely her creation, helped along by some great musicians, volunteers, sponsors, porch hosts and the aforementioned lucky attendees.
For a solid three hours under a cloudless pre-summer sky, we strolled, stopped, listened, applauded, chatted and repeated, over and over again, as wonderfully documented by my friend Darin.
And then, just like that, the neighbourhood was back to the way it had been, and almost always is: quiet, except for the occasional hint of breeze in the trees.
The breeze, while scarce on Sunday, found something extra to play with in those trees, thanks to the lovely someone of still-unknown identity who managed to pull a Porch Party prank of particularly high quality. Whoever it was hand-transcribed several poems and strung them from random trees with twine.
It was just another brush-stroke on a picture-perfect afternoon, but not an entirely unexpected one, given what I've come to know about people in this part of town.
They love their community, and I'm guessing by now they love my wife, too.
I can't say I blame them.